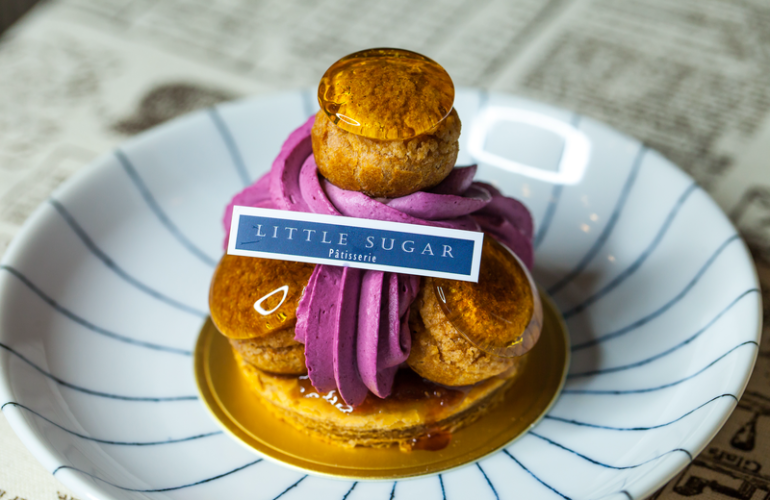 A realization of vision after years of working relentlessly

It has been over ten years since I stepped into the world of desserts half voluntarily. Growing up with my grandmother and elder sister with limited financial support, I decided to drop out of school and started working. Throughout my career, I never considered taking some time off, because I am my own prop.

Dedicated effort is the only key to sustainability

Though Little Sugar features exquisite desserts, I first started out my career in a traditional Taiwanese pastry shop making pastries mostly for religious offerings. A year and a half later, I went to fulfill the national military service, and came back to Changhua to work in a number of bakeries. Since my knowledge in the field was very limited, I first started out as an apprentice. After years of practice and training, I was part of a team that baked, decorated cakes and even designed cakes for competitions. During the time, I remembered that we baked 3,200 cakes consecutively in four days for
Mother’s Day. As you can see, my life was all about work.

I continued to work relentlessly until in 2010, a colleague of the bakery I was working in started up his own business, and invited me to join his new team at Bear Bakery. I accepted his offer with pleasure, but was under immense pressure. To ensure quality, cakes unsold within a day they were made were destined to go to waste. Also, during the startup phase, we hardly survived the competition with renowned stores in the neighborhood. All in all, the pressure on me was so much more intense than when I was an apprentice. When I was not working on developing new desserts, I also dedicated
considerable time to take courses in Taipei, taste desserts all over Taiwan, study recipes, and acquire all sorts of dessert related knowledge. I remember there was a period of time I was trying to make macarons, so I ended up spending over NT$ 10,000 tasting different macarons. It sounds like a hassle, but it was the endeavor that enabled me to make desserts that now received customer recognition, and further supported the startup business.

I was once asked whether opening a store was a dream that dates back to my childhood. Of course not. At the age of 17, I worked to make ends meet. It was not until I started working in bakeries that I started picturing a store of my own in the future. Throughout numerous job experiences, I had worked as a pastry chef in independent stores, chain stores, central kitchen, dessert section in a franchise, etc. I started out with zero knowledge in the field, and progressed to acquire know-hows in product development, cost control and many other aspects. Some stores place emphasis on quality, some on professional division of work, and of course some are very profit-driven.

Having engaged in a wide variety of business models, I was constantly searching for the right fit that speaks to my heart. Hence, after I left Taipei, I put my life on pause for a while to carefully ponder on what I really wanted to do.

Serving customers with what I love

I am frequently asked why I chose to open my store in Zhongchuan Community. My reason is simply “because I am from Changhua”. Other than Changhua, I did consider Tainan when I was looking for a location. However, I thought the friendly environment in Tainan is what Changhua lacks. Hence, I decided to stay and explore possibilities in bringing changes to Changhua.

I was looking around for places nearby the train station. At the time, a friend told me about this unused old warehouse built with red bricks and iron-sheet roof. Though it isn’t spacious, I decided that this was it at first sight. I planned the first floor as a dessert studio where I make desserts and serve take-out orders. The second floor is an indoor dining area featuring the coziness of a Taiwanese-style red-brick house. I saved up expenses for carpentry and painting by doing all the work myself. Also, most of the equipments were gifts from acquaintances in the industry. Within two months, Little Sugar opened for business in December 2016.

Becoming a store owner as opposed to working relentlessly as an employee makes me think of my relationship with the work I do. I am now able to incorporate my ideas with much flexibility in developing, making and selling desserts. Hence, I started introducing Taiwanese ingredients in my desserts. For instance, our Black Tea Apple Mousse is made with Taiwanese back tea, Taiwanese apple and violet creme. Lemon Guava, another signature dessert, features Taiwanese guava. Though my technique is still largely French-based which emphasizes layers, the infusion of Taiwanese flavors is intended to introduce the original flavors of Taiwan to more people. On a side note, the experimental collaborations add diversity to what I do.

Hardships in the past makes me stronger

I have not forgotten my past, nor am I going back. I used to have to live on eight dollars with my elder sister, sharing a pack of instant noodles and free soup from convenient stores. This is my so-called memories. Now that my life is more stable, I don’t consider making a fortune a necessity. I’d rather be conveying possibilities of making a living to young people.