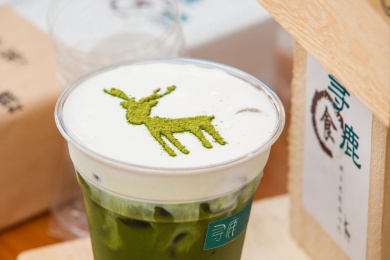 When it comes to cafe entrepreneurship, various challenges await. For Wei- Chan, owner of Caribou Cafe, it is also a major challenge for him to start his own cafe business. He used to study in culinary school, won awards and had an ideal teaching job. The challenges he face are upon himself but also towards others who hold a stereotypical impression of him. Wei-Chan spoke of his original intention to open a cafe. “It all dates back to 2010. I’ve had 7 years of professional training in Kaohsiung Culinary School, and I was quite used to living in Kaohsiung. When I first came back to Changhua, everything was unfamiliar to me. Meanwhile, I found myself missing the spaciousness and leisurely lifestyle in Kaohsiung where I could enjoy a cup of coffee at the side of Love River. That was when I started contemplating a cafe of my own.”

As the idea became clearer

Wei-Chan involved the whole family in his entrepreneurship. The flow of passerby and demographics was considered so as to choose the best location. However, Yong An Street and Zi Chiang S. Road were not as prosperous as it is now. Not many stores nor people
resided in that area back then. That said, a clear-minded entrepreneur would not have decided to do business there. However, Wei-Chan thought the location was actually promising as it sits right next to a mall. The area that surrounds naturally becomes a pedestrian zone where residents seek to fulfill daily necessities, and as people walk around, they will naturally notice news stores. Hence, what seemed to be a challenge can actually become an opportunity.

Exploring a lifestyle with Caribou Cafe

Before opening Caribou Cafe, Wei-Chan ran “Easy Pizza”, an Italian deli based on his expertise in cooking Italian cuisines. He then started Caribou in half a year, which successfully caught people’s attention. However, working double jobs means double loading. Both stores require the professional work distribution among Wei-Chan’s family. And that has always been a real challenge.

The ground floor of Caribou Cafe features open space. It is where customers and baristas can easily chat. The layout is in fact built after Wei-Chan’s personal ideal setting as a customer who loves to hang out at cafes. Another feature of Caribou Cafe is that there is no time limit. Wei-Chan intends to offer a venue where people can talk among themselves or cater to whatever tasks at hand simply at ease. Since day one, Caribou has been welcoming customers without imposing time restriction. However, speaking of rules, there has been several incidents of dispute with customers on this matter initially. Nevertheless, with hindsight, it is a process of developing a set of manners to foster a sense of respect and recognition among customers.

Whether the challenge is with people’s expectation, or it is brought upon by the owner’s self-imposed standards, the cafe itself is essentially unique for the exchanges happening in that domain. In Caribou Cafe, one might assume that the considerable amount of “caribous” seen in the cafe’s decor are probably part of the owner’s personal collection. Surprisingly, many of the caribous are actually gifts from customers. For instance, the head taxidermy on the wall was given by a customer who reckoned the cafe a better spot for the display of his home accessory. There used to be a customer who traded a caribous for a cup of coffee. This kind of interpersonal exchanges are something unlikely to occur somewhere else. More specifically, this shows that a cafe is a place where residents of the neighborhood can engage in vibrant dialogues.

Running a store as an entrepreneur is forever going to be challenging. Back in 2012, there were not many cafes or independent stores so to speak. Today, owners of the stores that are open for business often gather and exchange views on how to promote Changhua, and how to help get more recognition on Changhua among locals.

As a pioneering independent store in Changhua, Caribou Cafe constantly seeks for different collaborations that gather local awareness. One thing Caribou Cafe has done is to create an alliance that collaboratively order supplies from the same supplier with other stores in Changhua. It was to lower the cost and bring up profit for everyone. However, the impact of this method was only effective initially. In the long run, it doesn’t really help with establishing a sense of local recognition. Therefore, Caribou Cafe tried to organize fun fairs and events that invite locals to learn more about Changhua. Gradually, people are starting to see changes. Evidently, independent stores are starting to prosper in these couple of years. Each store has a unique perspective and issues that involve local
voices. New ways of collaborations are also introduced. For instance, the 2017 Farm Good Eat Party was a successful event organized by independent stores that advocate for Changhua.

Wei-Chan further implied that because Caribou Cafe is a family business, every member of his family can do what they do best individually based on a shared goal. Whereas, the lively interactions and collaborations among independent stores are based on the aspiration for Changhua to become better.