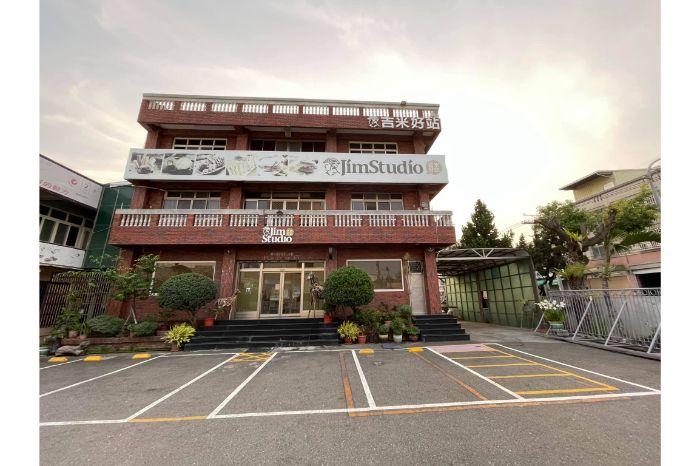 Creating my own path with my painting brush

First-time visitors to my store, Jim Studio, had probably all wondered whether it was a factory or residence. Indeed, my studio sits in front of a factory. It is not located in downtown Changhua, nor is it in a busy commercial zone. Nonetheless, it is where I grew up and have spent most of my life.

I was raised by a conventional family. After I finished my study, served the military and worked for a while elsewhere, I returned to work with my father. It was the normality for small enterprises and factories in Changhua so to speak. I worked in my father’s shoe company for twelve years. As I grew older, my perspectives started to differ from my father’s. Albeit occasional disagreements, I continued to work for the company as the general manager. It was until 2008 when the financial crisis affected the company’s business that I decided to resigned

I’ve always enjoyed painting. Though I had little time to paint when I was working in the shoe company, my passion never faded. When I first left the shoe business in 2010, I immediately embraced painting. I exerted all effort to promote myself and finally got the opportunity to hold my first exhibition in Changhua in 2012. In 2013, seven more exhibitions followed, during which I was continuously exploring. It was never easy for me as I was all new to the field. Apparently, exhibition planning consists of all sorts of details in the search for a venue, booking a venue, promotion and presentation.

I struggled back then. Exhibition planning and execution was hard, and the turnout was not great. It got me wondering whether I should turn my personal studio into a gallery where creators can showcase their works, and those who are interested can come to appreciate. However, a gallery would only appeal to a very specific group of people, so I started visiting galleries, cafes, art and cultural spaces, and my art oriented cafe came into being.

Turing the painting brush from canvas to coffee, pioneering with portrait coffee

Managing a cafe seemed easy, but the truth is, a change of profession would require a whole lot of completely different knowledge. Jim Studio was opened on April 30, 2014. Before that, I was pondering on when to open every single day. I knew not much about coffee then, and was essentially new to latte art or the portrait coffee I do now. One day, my friend and I visited a cafe in Taichung. I was deeply intrigued by the latte with a Totoro figure. Accomplishable with a painting brush as it seemed to me, I immediately searched online for videos, and I tried drawing on coffee. As many of my friends came to support my newly opened cafe, I experimented by using a toothpick to illustrate their appearances, and the result turned out to be very astonishing. That was how I set out on this portrait coffee journey.

At first, I drew on every single latte. However, as I began investing in more details of the portraits, the average 10-minute or more time spent on each portrait latte became physically burdening to me. So, I raised the bar only to make sure I am drawing for those who really desire a unique cup of portrait latte. My perseverance with my portrait latte led me to hold the one-of-a-kind portrait coffee exhibition in which more than 7,000 portraits were showcased. To me, the accumulation is also an attempt to establish a new local feature in Changhua aside from the traditionally known meatballs, braised pork belly rice or the Great Buddha. As more tourists are coming for my portrait coffee, new possibilities for Changhua are starting to surface. A store located in the suburbs of Changhua can be operating in full swing as long as it is doing the right thing.

From managing a gallery to hosting a marketplace, the artist serving at the forefront

You ask if I have sketched out a five-year or ten-year plan for Jim Studio. My answer is a definite NO. The underlying belief that supported me to open a store back then was simple, coffee and the promotion of art and culture. In 2015, there was an exhibition themed “seeds”. In the wake of the exhibition, the exhibitor suggested, “What about we organize a creators’ marketplace?” The idea was to allow creators to engage in face-to-face interaction with the public. They can receive first-hand responses about their creations from the exchange. This brilliant idea never occurred to me as I had already carried out more than a hundred exhibitions then. Anyway, I was unconditionally supportive of the idea.

The very first Jim Studio Marketplace took place in August, 2015. The organizer made use of his influence to invite more than ten seed inspired creators from all over Taiwan. A couple of tour buses came to the marketplace as well. I was overwhelmed by the positive turnout that proved the idea feasible. Yet, the excitement was soon met with a number of problems including the massive amount of trash left behind by the crowd, messy toilets, furious neighbors unhappy about the disorganizing parking situation, etc.

Since August 2015, we have held eleven Jim Studio Marketplace events, and the scope of the event has gradually grew. The marketplace in January earlier this year accommodated eighty-four booths. As we are becoming more experienced, more adjustments are to be made to planning details like on-site staff allocation, traffic management, site insurance, event layout, etc. Also, in order to sustain the model, the marketplace started out as a free platform for creators now requires a vendor service fee. In addition, visitors to the marketplace are encouraged to vote on their favorite vendors. These are ways we manage to sustain good creators and performers.

Sustainability can only be achieved when good performances, creations are being seen and cherished by people who are willing to give the equivalent worth of support. Such exchange also suggests that people are learning to appreciate beauty in things on a day to-day basis. Instead of being considered as an occasional spending spree, it is actually becoming a norm. For instance, a young entrepreneur at the marketplace sells socks that feature great design and material. People who come to the marketplace would notice the product, recognize the value of the design, material and entrepreneurship, and create a sustainable cycle. As a host, this is what I would like to accomplish for the city.